Doors of Jannah-Turkey and the Mediterranean

Saph carpets are furnishings for the House of God.


The above,from a 14th century il-Khanid illustrated work,shows the Prophet seated upon a prayer rug.The word"Allah"can be made out in the niche.


This index unfolds from the Middle East to the borders of China.

Most Saphs were woven sideways,on normal sized looms.Exceptions have been noted.The original number of panels cannot always be ascertained,as the fate of a Saph is to be cut into fragments and used for solitary prayer.

Depictions of arcades appear in early Arab literature and painting

Only one Mamluke prayer rug has survived

The oldest known Saphs are two fragments now in the Turk ve Islam Museum in Istanbul.A Holbein style carpet on blue-green ground features two rows of niches,thus effectively creating the first tiered-style.The niches are so schematic that they could also depict rows of tents

The more elegant of the two incorporates all pious accessories found in later carpets,as well as introducing the "re-entrant" theme


The lamps appear in another fragment from the Textile Museum,along with rosettes from the "Chessboard" group

Many fragments of genuine mosque fittings have survived.Three design types are said to have been made for the Selimiye mosque in Edirne.Whether contemporary or not cannot be confirmed,but they may well be late 16th or early 17th century

Many fragments exist with the floral arabesque design.They appear to be from one carpet featuring a niche-lamp and a medallion not unlike that seen on some Cairene prayer rugs

A fragment once in the Michaelian Collection later passed to Harold Keshishian,and was auctioned twice,at Sothebys on December 13 1986 for $16,500;and again at Sothebys on 7 December 2010 for $62,500.It relates directly to the TIEM`s 196,sharing the same elongated Medallion


Two very similar fragments were with Eskenazi and Thompson respectively

An impressive double-decker variant was once with Campana


At least three examples are known,presumably from the same ensemble,featuring symbolic position-markers at the base of the mihrab.Probably more are stored in Istanbul.


A third example was published by Ledacs in 1977.It is not clear where it belongs in the scheme of things


A coarser,more "industrial" quality is said to have lain in Istanbul`s Süleymaniye Mosque.Less courtly,it paves the way for a larger group of "Ushak" Saph carpets


An imposing two-tier item,sold twice at Lefevre`s in the 1970`s(the last on 5 October 1979,Lot 29,for 7500 pounds)eventually reached the Al-Sabah Collection in Kuwait

A second large piece is now in the Vakflar carpet Museum


A third item is in Chicago

A related,perhaps earlier group from Edirne with feet and lamps has a more elegant spandrel decoration


A two-tier piece in the possession of the Istanbul dealer S.Haim was published by C.G Ellis(Antique Rugs of the Near East,Bode-Kühnel,plate 28)


Another example with lamps,pendants and Hatayi field was published by Stanley Reed,and what is possibly a closeup from the same carpet,in the Textile Museum Journal


A further three examples with lamps and feet have been published

A group of green ground Ushak saphs appeared on the market in the 1980`s, realistically dated to the 18th century.A piece from the Chris Alexander collection was auctioned at Christies in 2008 for $83,850


Two large fragments were also acquired by the Swedish dealer J.P Willborg.The draughtsmanship of the niches and spandrels appear to originate from different sets


His colleague Alberto Levi featured another fragment on his website

Many fragments of the same have appeared down through the years


In a similar style,but with different treatment to mihrab and spandrels was a piece sold twice at Rippon Boswells,first on 17 November 2001 for $5,330;and again on 1 December 2007 for $28,225.A second very similar piece in two-tier
form was offered by the Indigo Gallery


One last item,for a special space (or minbar) features a stacked mihrab style and went unsold at Christies on 23 April 2013(80)


Representative for a whole group of Ghiordes Saphs,often of mediocre quality,is a double-decker from the Sulimanye Mosque


A carpet from the collection of H.Keshishian is interesting for its inscription 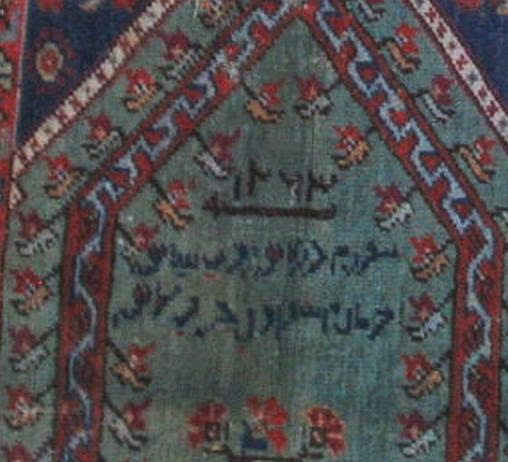 Pieces attributed to the Ushak zone include a carpet sold at Sothebys on 11 June 2008(29) for $11,250,although this may well be from the Mujur-Kirshehir triangle

As mentioned,Mudjur seems to have taken the lead in the 19th century and produced some beautifully coloured examples


Long rugs with up to 12 panels are known

The carpet has all the simple refinement of an Indian Dhurrie,and does in fact recall the Kilim style of old Karapinar,from whence it may hail

Conventional wisdom attributes it to Ushak(red wefts),but it is unlike any of the Ushak productions shown here.A second fragment,from the Haim Collection,is known only from photo,and features 6 full and two half niches.The Berlin museum also possesses a wonderful Karapinar kilim,the "Seven Sleepers"

Posted by John Andrew Taylor at 09:49