Although contemporary sources abound,we know little about the true origins of these carpets.
They nevertheless represent the last gasp of a tradition,and the beginning of its industrialisation.Far-sighted men in the Indian Jail system and the newly founded Art Institutes recognised the artistic and financial possibilities inherent in India`s nascent carpet industry and began actively promoting these interests after the first International Exhibition of 1862.Demand outstripped supply and by 1900 large factories had been established in Agra,Jaipur,Mirzapour and elsewhere,with a corresponding and unavoidable loss of quality.The Jails were in an advantageous position due to their supply of virtually cost-free workers.Lifers and long-term prisoners were preferred as trainees for obvious reasons.Conditions in the prison workshops were said to have been superior to those in the regular industry.The Indian carpet-makers` predilection for the Red Ground Floral design can be  be partially explained by the availability of genuine old examples.The Maharajah of Jaipur lent examples for reproduction to the Yeroda Jail,and eventually set up his own workshop.In Asia,the Jaipur carpet collection is  second only to that of Istanbul. When the Shahbanu of Iran set about establishing a carpet museum in Tehran,examples of such carpets had to be purchased on the open market(or from the Rockefellers)as no such examples seem to have survived in Iran.Yet that alone cannot account for the prevalence of the Indo-Persian design and its extremely accomplished execution.It must surely have been orchestrated by a group of talented Ustads on the Indian sub-continent, who ensured the continuation of a carpet style once created somewhere between Herat and Lahore. 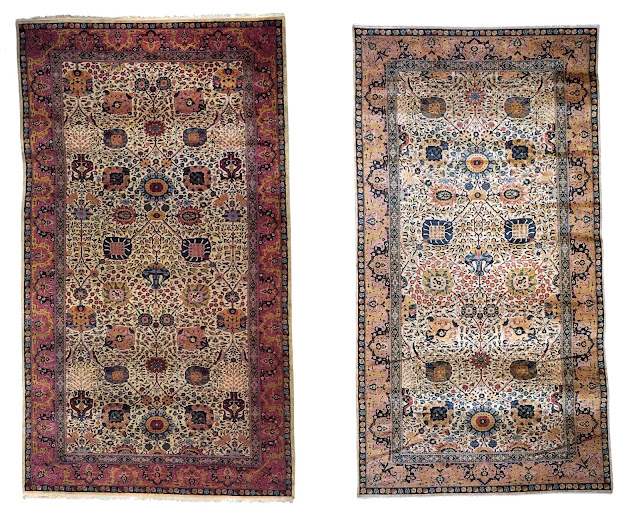 Posted by John Andrew Taylor at 19:35 No comments: