Influences from Iran and India coalesce in 18th century South Caucasian carpets to produce some remarkable productions.They do not appear earlier than 1700,and like the Dragon Carpets their production history is an enigma.A cottage industry of the type later pursued in Turkey and Iran seems unlikely for such large and complex rugs;perhaps they were produced in jails.They basically follow the game-plan of the RGFs,with a central spine consisting of opposed Lotus palmettes,Karagashli Göls and eight-pointed stars,framed by the "in-and-out"Harshangs.The description "Harshang",from the Persian word for crab,was introduced into the carpet literature in 1953 by Cecil Edwards.


Although the trefoil is most commonly encountered,a rare Turkish influenced border with delicate leaves and the remnants  of connected vines was sometimes employed.


A Bacri type strapwork border encircles the Bernadout carpet,more vigorous than its counterpoint from Sothebys,which seems to have been produced in the same area as the Pohlmann carpet(320)

Three examples illustrated by Yetkin display the variety of borders used.A residual design element is the half-palmette,either at the beginning or end of field.All three carpets were found in Turkish Mosques,as were so many others,but none in the Caucasus,perhaps indicating an East Anatolian origin.

Another carpet with a mighty strapwork border exists only as scattered fragments.

Of the following three classic productions,the first and third employ a system of addorsed Palmettes;the middle piece simply repeats the design.The first carpet reveals(through wear)the typical weft-tracks left by thick cabled-yarn,also present on other large-scale Caucasian examples.It would seem to be a carry-over from the Vase carpets,possibly a marker for the works` progress,or just a simple mechanism to straighten the carpets at certain critical points.

Two spritely examples,one worn and the other presumably restored,both include traces of Vine-Scrolls in their fields,now reduced to a simple lattice.Indeed all lattice-design carpets can be viewed as descendents of the Spiral Vine group.Here they form diamond rhombuses,a theme taken up in the 19th century.


A fragment shown at the Milan ICOC has foreshortened field elements which may have been the starting point for the later Soumak models. 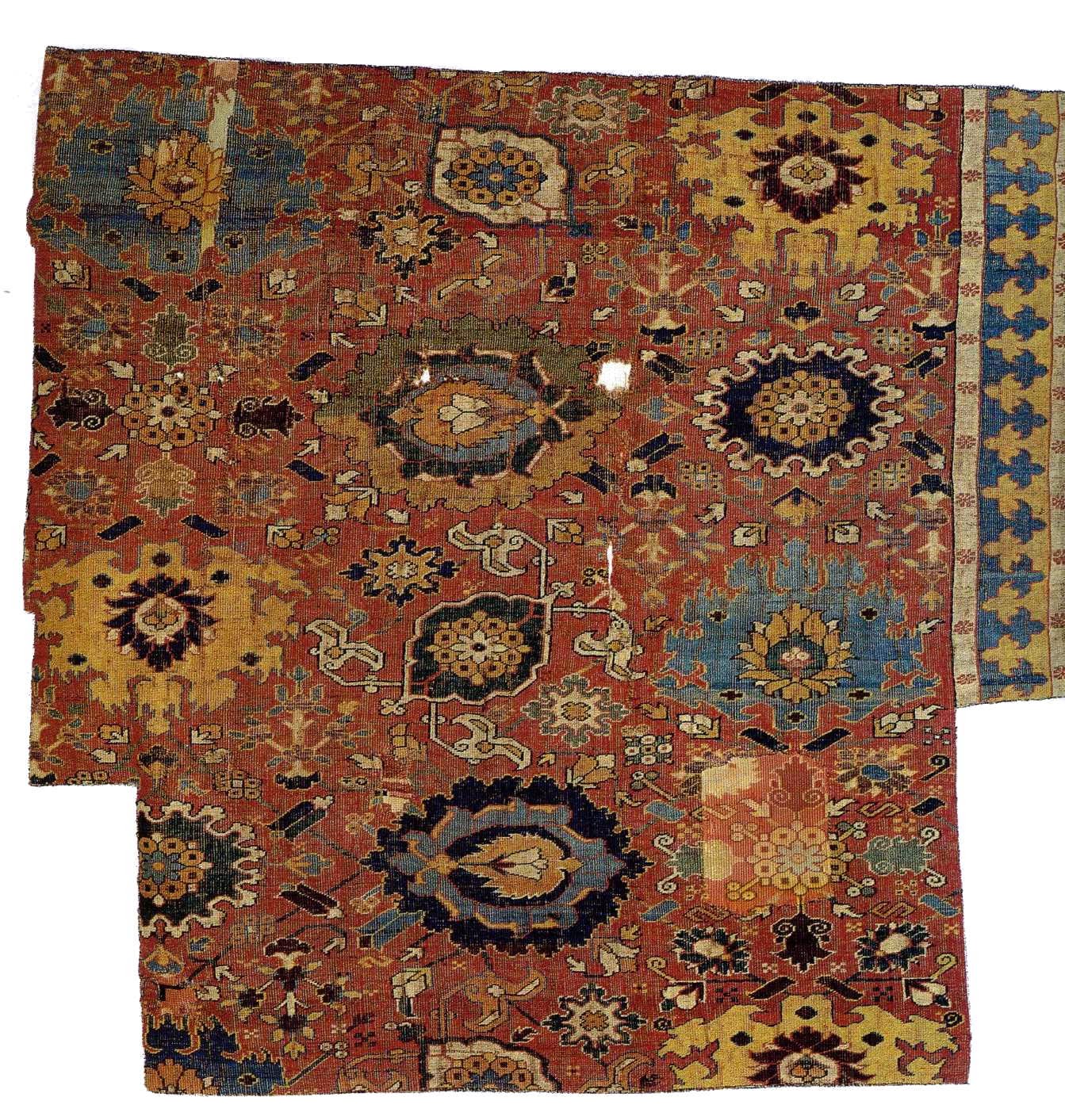 The spine of the Battilossi carpet(359)or similar,was adapted in the 19th century to produce some exciting runners.

Still within the RGF sphere of influence is an example from the Glencairn Museum,whose border elements were later adopted  in 19th century carpets.

A carpet in the TM has lost its orientation completely;the floral elements recumbent on a listless field.Yet the border(from a "sunburst" carpet)is full of energy.

The Harshang design in its purest form can be observed in the following.The border on the Calatchi carpet has been derived from Indian carpets.

Ambassador Aita `s rug lacks any sense of dynamic in the field,but it is still an attractive item.

A later 19th century example once at Nagels still maintains a courtly pose with its cloudbands and 18th century border.

A carpet once with J.PWillborg demonstrates the RGF plan with an emerging Herati design pressed into service.


A group from Khorasan,perhaps the homeland of the Harshang design,is signed and dated and includes citations from classical Persian poetry.It has been dealt with in the entry investigating the Herati design,from 28 September 2014, Nrs 33-34:

On the Origins of the Herati Design

A small group of 19th century rugs,many with improbably early dates,represent the nadir of the RGF design.Although still very attractive and desirable,they have actually reduced the Emperor`s design to its basic elements:a repeat medallion design with palmette inserts.

A cluster with Lotus-Palmette border seems to be the most elderly.The first carpet was published by Pope,and had a twin in the Rothschild Collection,alas now lost to view.

Lively cloudbands are a feature.The Schurmann carpet is dated 1789,and was one of the first to be published.

A carpet in Lebanon is dated more prudently to 1892.Sothebys example shows clear signs of fatigue.

Examples of this group were also made on a blue ground.The earliest dating is 1758;the latest 1913.

For the blueground models an elegant new border design was introduced.

At least another three variations are known.

A group of mostly blueground"Kuba" carpets with Harshang also occur more frequently with the Afshan design.These two examples were probably made in the same workshops.

They all feature dramatic Lotus Palmettes and a repeating spine taken from 18th century models.


The Persian "trellis" concept is still present in these essentially Caucasian examples,but will later disappear,surviving only in Afshan models.

Also characteristic,and an old device from the RGF carpets,is the use of half-palmettes at the beginning or end of field.Two examples seem to lead into the Avar Group,one is redground,and a third has a very jolly light blue field.

A further cluster has the jagged outline associated with Soumaks.Justly famous are two yellow-ground rugs.

Some very strange productions were built on top of this,like mud-huts on buried monuments.

The earliest publication of such rugs was by Hofrichter,followed by Ulrich Schurmann.

Thus it becomes sometimes difficult to differentiate between Caucasian and Persian models,especially without the benefit of a technical investigation.

There is no end to the variety possible with one design.

A group of decorative and sought after carpets,the Karagashli,got a lot of mileage out of a single section from the Harshang,although sometimes it may seem to be the Afshan design.They made runners and small rugs.Two long rugs have attained iconic status,a third piece(with Harshang)can be added.

Other long rugs are either on white or blue grounds,such as a piece sold at Sothebys in 1981 and later with Eskenazi.


A carpet with squarer shape was once with Calatchi in Paris and has a pair in the V&A.

The blue ground examples have proved their mettle at the Auction hunting grounds.There are two types,with and without crested Harshang Palmette.


Virtually every known Caucasian rug design was reproduced as a Soumak(with the exception of the Star Kazak)A rare type of large palmette soumak,based on the 18th century models (such as 330)is second only in desirability to the Dragon models.

Curiously,Christies long rug from 2000 resembles a soumak version of a knotted rug reknotted as a knotted rug.


Sothebys fragment from 2002 has some age going for it;the Memarian fragment is probably NW Persian,interesting for the boxed insert said to depict a Dragon and Phoenix;and RB `s variant was a very small Baku.


Some beautifully patterned runners were made in the Karabag region employing the Lotus Palmette as a Jacob`s Ladder.

Some of the most refined Harshang design carpets were produced in North West Persia,probably by Kurdish weavers.A grand early carpet integrating Garden design is in the Gulbenkian Collection.


From the same era two carpets have survived with meander borders and deep Surmey grounds,one in the Folkwang Museum,the other in the MAK.


An impressive example once in the Ballard Collection seems to have disappeared.


To what heights of magnificence these carpets could rise can be seen in the example once in the McMullan Collection,featuring a scaled-down,but still immaculate cartouche border.

Colouristic wonders,and reflections of fastidious pride at the workplace.


An example once in the Winthertur Museum has an elegant RGF-type border of Lotus and Split-leaf.

Written out as North West Persian work,the one or the other may be from Karabag.

One last foray into East Anatolia would not be out of place,in search of a small,amorphous group with roots in the Golden Triangle.A carpet once with Nicky Eltz later sold at Skinners in 1988 for $9900;a similar carpet  was a snippet at Christies in 1998 for just $2305.


A certain amount of degeneration is necessary in order for progress to occur,as the next items demonstrate.


Published by Schurmann,and later with Reinisch,the following represents a thoroughly cleaned up mode.


A piece at one of the many William Price sales with strange colouring and repeat design.

At the perimeter of the Emperor`s influence,but still displaying the "in-and-out"Palmette.