Amongst the many fascinating pieces uncovered by rugrabbit during its recent foray into the world`s museums,three items are of particular interest.


First published in the catalogue to an exhibition of carpets at the Cleveland Museum in 1919,and later by Maurice Dimand in a controversial article(The Art Bulletin 1923)this large medallion carpet from the Ballard Collection has had a chequered career of changing attributions.Starting life as 15th century Persian,it mutated to late 16th-early 17th century Asia Minor,before ending in the Met`s carpet catalogue of 1973(page277-8)as late 17th-early 18th century,declared as Caucasian.It formed part of a spirited rebuff from Arthur Pope in 1924("Research Methods in Muhammadan Art")Pope took Dimand to task for his over-reliance on dating Persian carpets based on Miniature paintings.The Ballard  piece is in fact(according to Dimand and the 1973 catalogue entry)Turkish knotted,although this was no reason for Pope to rule out its North West Persian origins("inasmuch as most Persian rugs and practically every Caucasus rug are woven with a Ghiordes knot")This is clearly false when applied to the Tabriz Medallion carpets,all of which are Persian knotted.However,according to a recent analysis by P.R.J Ford,the carpet IS Persian knotted.

The carpet itself is a curious amalgam of classical and provincial elements.The central medallion is well proportioned,occupying the width of the field,with cusped outlines.This is not unlike the carpet illustrated by Martin(plate XXXII),or even the Parish-Watson.


But it`s here the resemblance ends.A mock-Herati field sports an endless repeat of quatrefoils,perhaps influenced by the border design of certain red-ground florals.

These medallions are arranged over the field in a similar fashion to the Boston Museum`s carpet.It also shares the Boston`s Khatam banded star in the field.

A failed attempt at a strapwork border rounds off the ensemble with clumsy proportions and inept corner solutions.It`s impossible to judge the colour from the MET online picture,which is a lurid red-light depiction in which something has gone terribly wrong:all other reproductions are in black and white.The latest analysis of the carpet has yielded a persian-knotted rug with 4 rows of red woolen weft(P.R.J Ford-The Persian Carpet Tradition)
MET
The Dimand-Mailey description gives brown as the ground colour,which is unusual-the majority of medallion carpets have red,blue,or light ground colours.This may indicate massive and faded re-piling,in which case further analysis would be necessary in order to dig up evidence of an original persian-knotted Schicht.Excessively stiff carpets of this type are often mistaken as early,when in fact they are archaising examples from a later period.The medallion form carries over into the 19th century in a type of Seyshour with Kasim Ushag embellishments.

A second carpet from the Metropolitan Museum could hardly be more different,and is presumably the one referred to by William Robinson in Hali 170,page 67, a silk carpet in the Polonaise technique with metal thread.

The Bible for these carpets is Friedrich Spuhler`s Dissertation of 1968,in which the Ruxton Love carpet is however not mentioned(although it entered the Museum in 1967)

The Met`s carpet has a counterpart in the Hermitage,which was discussed recently in Hali by Michael Franses(Hali 153-39)He describes it as Iranian,although the Museum Staff consider the depicted buildings to be Indian.

On the Met`s example the silouetted mihrab within the main building has a Taj Mahal touch,and is topped with a textile canopy,but the adjacent building appears to be a Gunbad with a dome of Persian fired brick.

The Flora can also be compared to that of the Altmann prayer carpet fragment,although they probably have their origin in the first European Herbariums.

There appear to be only two known Polonaise carpets with figurative designs:the first is in the Residenz Museum in Munich,an animal combat depiction whose drawing was described by Friedrich Sarre in 1910 as"rough".

It can be dated to the early 1640`s and has much in common with the group of silk Keshan kilims.

The second is the famous Marcy-Indoudjian Cope in the V&A,rightly considered a high-point.

Neither of them have much in common with the MET`s piece.

It would be instructive to search through the earliest publications featuring reproductions of Verdure Tapestries. 67.2.2 was first published by Martin in 1908(fig.156)It was said to have entered the market in Constantinople in 1900,sold for 1000 pounds Sterling.Exhibited at the Musee des Arts in Paris in1907,it later sold for the princely sum of 6000 pounds.Martin dated it to 1640.Eiland and Ellis,in their commentary,are more reticent:"apparently from India"It is said to have areas of jufti knotting.Pope republished it in 1923. 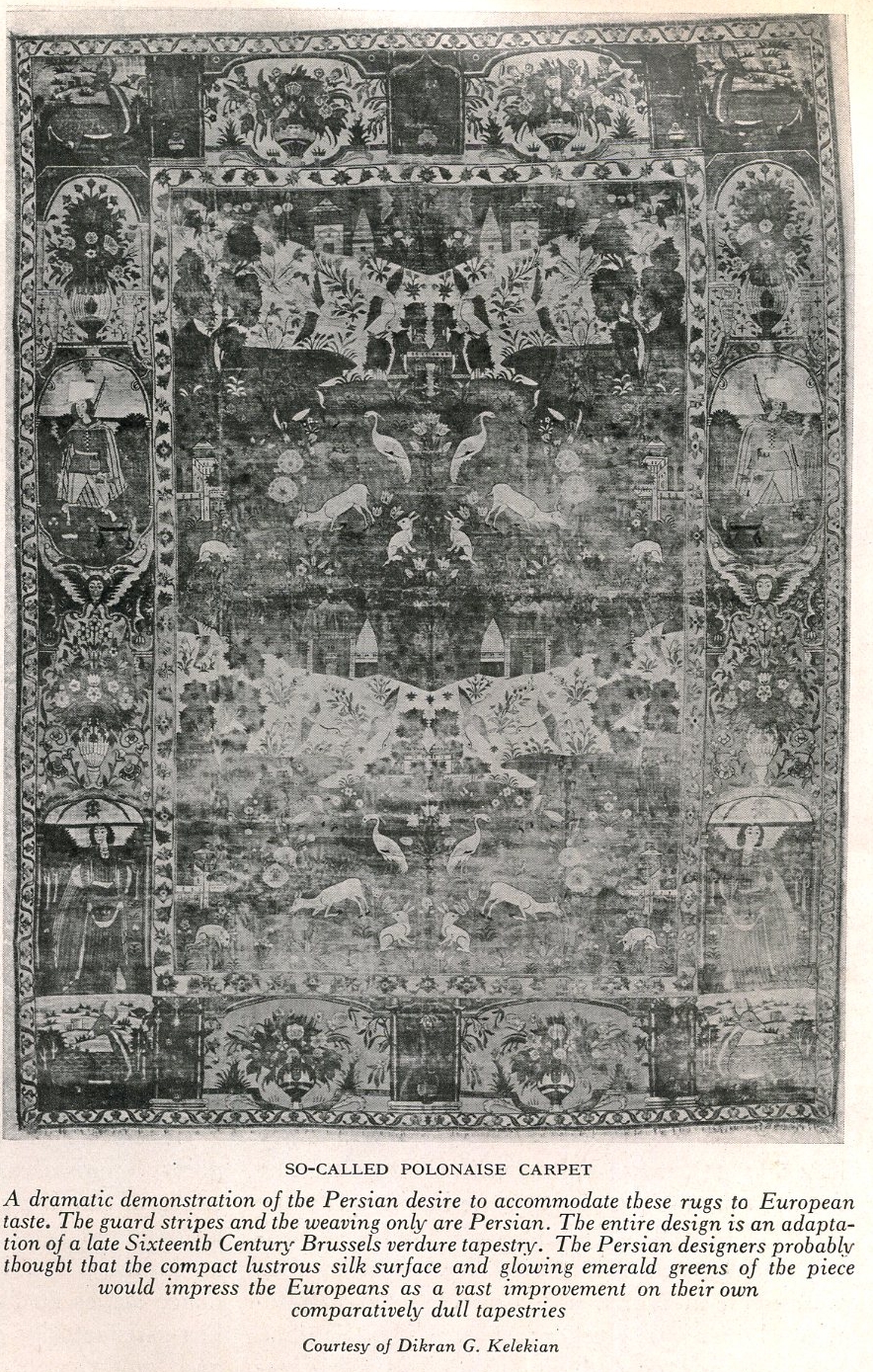 Another strange carpet in silk with metal thread entered the Hermitage in 1925.

From the 20`s we also have a number of  fake Persian silks-the "Buyids",which have been definitively unmasked by Blair/Bloom/Wardell.link


It seems certain that workshops were active in Persia in the early 20th century which were capable of reproducing the Polonaise style.Carpets with metal thread were still being made in China and East Turkestan at that time.Presumably they could even be made today.

Finally,the online presentation of the Brooklyn Museum Holdings is a welcome treat.Surely a printed  catalogue is long overdue?The Pratt Safavid fragments are amongst the most beautiful and iconic weavings to have survived.link 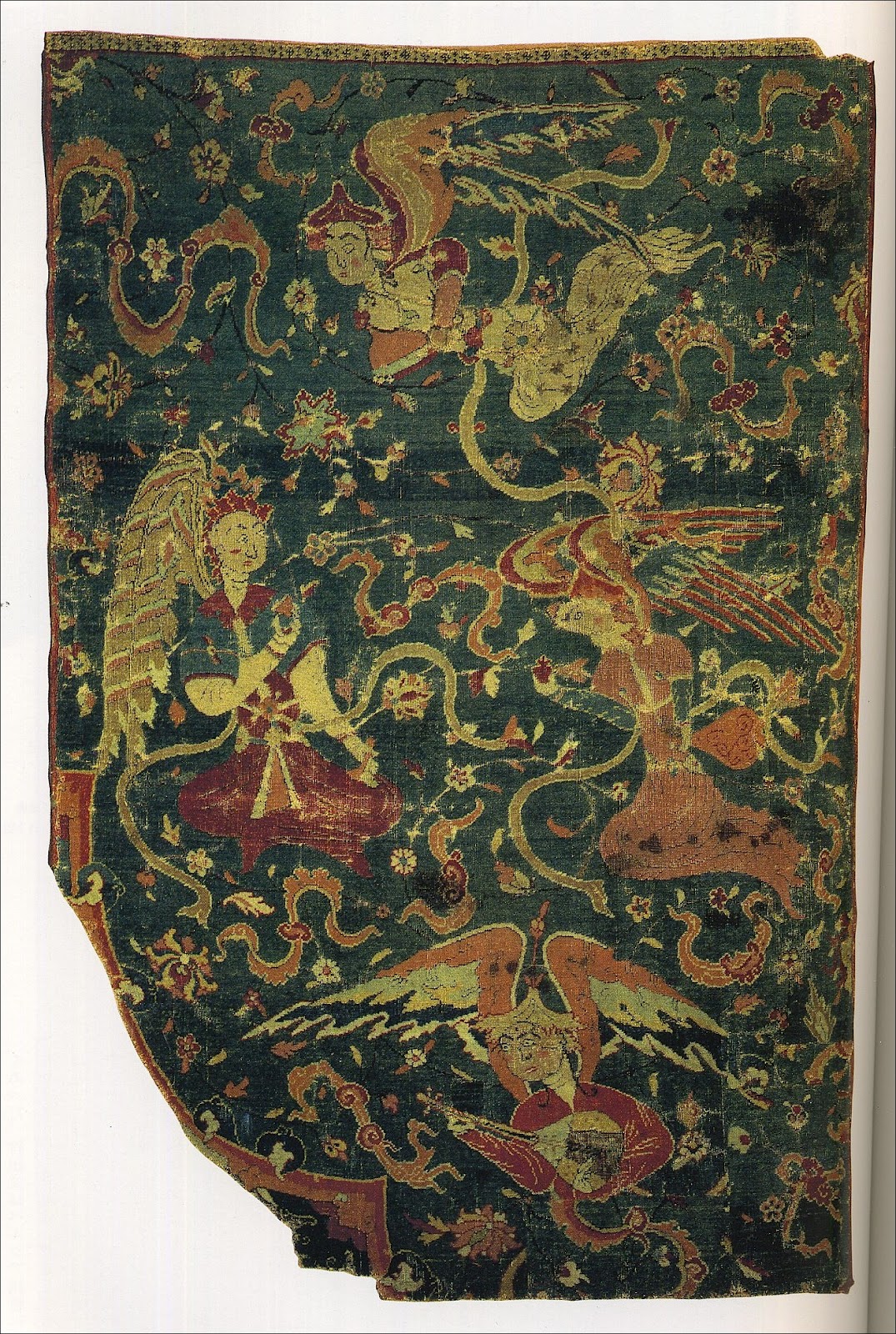 The pieces have now been separated from their original patchwork puzzle,some having been rejoined.

The original Yerkes catalogue painting is difficult to read,but surely more exciting.These remnants have been the subject of intense scrutiny in the last years,especially from Jon Thompson(The Hunt for Paradise,page 290)Curiously,no one seems to have taken much notice of the upper border fragment,which bears an inscription sequestered in a black-ground cartouche.

Inscribed Safavid carpets are uncommon-the Ardabil,the Poldi Hunting carpet,and the Emperor`s carpet spring to mind,plus the shaped silk carpet published by Pope from the shrine of Shah Abbas II(dated 1661)and a later silk fragment dated 1717 and sold at Christies in 2006.

Two leading experts had this to say about the inscription:

"Absolutely nothing on this one.  There is no date.  The first word is lutf (grace) but the rest is unreadable.  I showed it to Wheeler Thackston, who concurred.  Looks like it could have been a line of poetry, but that by the time it was transcribed from the written word to a point-plan to knots, it is so jumbled that it is illegible.  If you had some idea about what it was supposed to say (i.e., because you had seen it elsewhere), then you might be able to "read" it by matching odd strokes, but alone nothing."(Sheila Blair)


"Dear John Taylor,
Some time ago Jens Kröger gave me your mail about the Persian inscription on the Yerkes bordure fragment. I have thrown several looks on it, and I supppose that it should be a quotation from a Hafiz poem or fragment, as one can rather clearly read left of the middle "hâfiz-i miskîn", the poor Hafiz, and at the beginning the first word is "lutf", favour. Unfortunately, I couldn't find a pertinent verse in the usual edition of Hafiz, also the last words, by which these collections are arranged, cannot be read in the picture.
Now this is a painting, and the mistake in the letters of "hâfiz" could be due to a misunderstanding by the painter, but it may also already appear in the knots. But is there any other sort of image of this bordure?
I'm sorry I can't make more of it at the moment.
With best wishes
Claus-Peter Haase"

Posted by John Andrew Taylor at 11:11